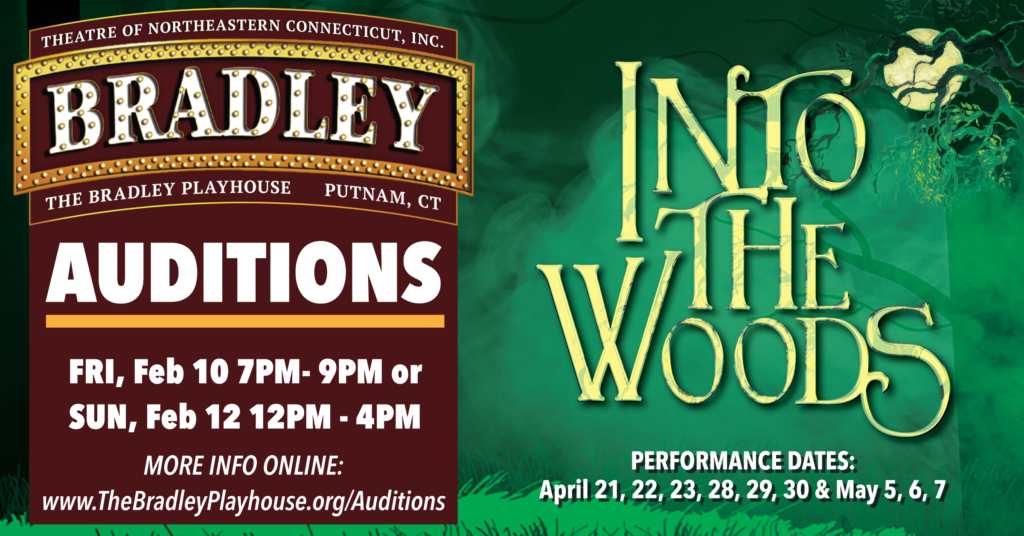 Join Cinderella, Jack, Little Red, Rapunzel, and all your favorite fairy tale characters in a magical mashup of epic proportions!  See what happens after happily ever after in this touching musical tour de force.

Ages 16+, Roles for all genders

(Note: There is no ensemble. Ages are not of the actor but of the character.)

Narrator/Mysterious Man (Male Presenting, 40+, Baritone) does double duty as both the Narrator and Mysterious Man.  Both characters are mysterious in their own ways and must be able to captivate the audience from “Once Upon a Time” all the way until “Happily Ever After.”

Cinderella (Female Presenting, 20’s, Soprano) is kind, goodhearted and desperately wants to go to the ball.  Once she has everything she ever wanted, she wonders if it’s really what it’s cracked up to be.

Jack (Male Presenting, 16-20, Tenor) is a little daft, especially regarding his best pal, Milky White, the cow.  Everything changes after his adventures in the sky, and he’s suddenly alone.

Jack’s Mother (Female Presenting, 40+, Soprano) loves her son but knows how simple he can be.  Not one to be pushed around, she soon finds that there are other strong characters in the woods.

Baker (Male Presenting, 20’s-30’s, Baritone) is our hero though he’s not always making the right or kindest choices.  Determined to have a baby, he must go into the woods and soon finds the key to his childhood trauma.

Baker’s Wife (Female Presenting, 20’s-30’s, Mezzo-Soprano) wants a baby but also wants her husband’s affection.  She soon finds that there’s more to life than what’s in their little cottage and explores some what-ifs.

Witch (Female Presenting, 30+, Mezzo-Soprano) seems like the villain until you get to know her.  A woman with a complicated past, a secret daughter, and a time-sensitive spell to break.

Little Red Riding Hood (Female Presenting, 16-20, Mezzo-Soprano) is on the cusp of womanhood.  She wants to do the right thing but is pretty devious as well.

Cinderella’s Prince/Wolf (Male Presenting, 30’s-40’s, Bass-Baritone) is a handsome, suave predator with a flair for the dramatic who has one eye on the throne and the other on a handful of young maidens.

Rapunzel (Female Presenting, 20’s-30’s, Soprano) is a sheltered woman-child who only knows the confines of her turret and the affection of her capture-turned mother.  When things change for her, she becomes unhinged.

Rapunzel’s Prince (Male Presenting, 20’s-30’s, Bass-Baritone) is just as suave and dramatic as his brother though he isn’t next in line to the throne.  Always in competition with his charming brother, his eyes, too, are fixed on a handful of young maidens.

Cinderella’s Stepmother (Female Presenting, 40+, Mezzo-Soprano) is beautiful on the outside yet horridly rotten and cruel on the inside.

Florinda (Female Presenting, 20’s-40’s, Mezzo-Soprano) is one half of the evil stepsister duo.

Lucinda (Female Presenting, 20’s-40’s, Mezzo-Soprano) is the other half of the evil stepsister duo.

Cinderella’s Mother/Granny/Giant (Female Presenting, 50+, Soprano) does triple duty going from a lovely, warm, ethereal mother to a cantankerous granny to the voice of a not-so-pleased Giant.

Cinderella’s Father (Male Presenting, 50+) is an out-of-touch, absent father with a penchant for wine.

Steward (Any Gender, 20+) is the right-hand person to the royals, and though not a royal themself, they sure act like it.

THERE ARE NO CURRENT AUDITION NOTICES POSTED.

CHECK BACK ON THIS PAGE

** Parking is not allowed in the church parking lot directly behind the theatre. PLEASE Plan getting to the Theatre early for parking close by.

Due to recurring mechanical issues with our wheelchair lift, we are currently unable to guarantee wheelchair access to the theater.

The TNECT Board of Directors is working diligently to resolve this issue as quickly as possible. We apologize for the inconvenience and appreciate your understanding.